With permission from cultural owners, and from me, a wayfarer in the Eskaya Ancestral Domain has made a large poster of Eskaya writing. He did this by accessing the nearly complete PARADISEC collection to download characters from the sadly-nowhere-near complete Eskaya font.

It’s really great to see the first material application of this arduous and costly digital brought to the community. Since this is largely a symbolic, rather than a pedagogical poster I don’t want to be a pedant but I must point out some of the oddities which Eskaya teachers have apparently already brought to the attention of said wayfarer:

END_OF_DOCUMENT_TOKEN_TO_BE_REPLACED

Standard
Sven Van Haelst of Maaseik in Belgium is an archeologist by training who recently discovered this copper/bronze ring in his backyard. He would like help identifying the script used in the inscription. From haphazard corridor discussions at the MPI we have arrived at the following:
If anyone has any ideas about this please let me know and I will update this post with new theories or information.
This blog is rarely updated! Want an email notification whenever there is a new post? Click on the follow button right at the top ↑ that looks like this:

I doubt that there is any other library in the world that will let any old schmo handle a rare 120-year-old document and go and scan it using the library’s own equipment.

If WorldCat is to be believed, there are only six copies of Marcilla y Martin’s 1895  Estudio de los antiguos alfabetos filipinos (Malabon: Tipo-litografia del asilo de huérfanos) in public archives worldwide. One of these is in the National Library of Australia.

Yesterday I scanned just a couple of high-resolution pages, including the brilliant frontispiece. The text of this volume is actually fairly unenlightening – grammatologists should not expect any grand insights – but the typesetting and illustrations are brills. In an earlier version of this post I extended my admiration to the reproductions of Philippine letter shapes – Chris Miller has informed me that they are actually serious distortions! The Eskayan word for ‘alphabet’ is abadiha, generally spelled ‘abadeja’ following Hispanic orthographic rules. I analyse this  as a compound of four syllables ‘a’, ‘ba’, ‘di’ and ‘ha’. This is fairly typical way of forming words for ‘alphabet’. Consider the word alibata from the Arabic recitation order of ‘alif’, ‘ba’, ‘ta’, abakada from ‘a’, ‘ba’, ‘ka’, ‘da’, and even alphabet from ‘alpha’, ‘beta’.

But earlier this year Kristian Kabuay drew my attention to the story Abadeha: The Philippine Cinderella as a possible folkloric source for the Eskayan word. I found a copy at my local community library. Here is the frontispiece:

END_OF_DOCUMENT_TOKEN_TO_BE_REPLACED

I came across this outstanding paleograph sitting quietly in a glass case in the Archeology and Anthropology building of my university. The quality of the image is somewhat reduced due to the fact that I was pressing my phone against the pain. The caption reads ‘Easter Island rongorongo board with approx5 500 glyphs, collected in 1870.’

Easter Island rongorongo board with approx 500 glyphs, collected in 1870

According to the Wikipedia entry on Rongorongo, this artefact would represent one of only 26 known objects worldwide bearing a Rongorongo inscription. Considering that Easter Island may be the last place where writing was independently invented — after Central America, the Middle East and (perhaps) China — it’s remarkable that such a rare item is sitting casually amongst a collection of Austronesian and Southeast Asian sherds and flake tools.

Of course, the question of whether Rongorongo represents actual writing remains vexed as does the authenticity of many of the surviving artefacts. The meaning and traditional use of Rongorongo has tormented scholars from their earliest encounters with it.  By the time examples of Rongorongo were being collected for analysis, no literate Easter Islanders remained and the wooden texts were being used for fishing spindles or being burned as firewood. If Rongorongo is writing, as we know it, there is no consensus as to what kind of system it represents or whether the glyphs are merely mnemonics for the oral reproduction of ritual speech.

The date of 1870 suggests that this specimen was collected on the O’Higgins scientific expedition to the island in which the famous Rongorongo text I was obtained. I contacted the person responsible for maintaining the exhibit who then contacted the original collector, the archeologist Professor Peter Bellwood who gave the following succinct and highly informative reply:

“I bought it in Santiago in 1975. If it wasn’t a replica it would be worth millions, and certainly not in that glass case! It is probably made of plaster of Paris – not to be dropped.”

A friend recently drew my attention to an extraordinary article published by the GMA network with the intriguing title ‘Four things you may not know about our Baybayin‘.

You can follow the link about but I’ve reproduced the full text below in full in case this curious social document gets lost in the shifting sands of online media.

What strikes me in particular is how neatly the mystic researcher Bonifacio Comandante distills and amplifies  folk views on writing in general and baybayin in particular. Namely, that writing has the ability to effect supernatural change, characters are always iconic even if their sources of inspiration are hard to discern, writing is the primary communicative modality while speech is secondary, and that Philippine writing is ancient. There is no empirical evidence for any of this, but the very existence of such theories is itself evidence for the social meanings people attribute to writing.

Iconicity is a feature of Eskaya attitudes to writing as treated in the the traditional story ‘The Spanish and Visayan alphabets’ in which Visayan (ie, Eskayan) letters are associated with parts of the human body while Spanish letters resemble ordinary things: a candlestand for the letter ‘I’ the tale of an animal for the lower case letter ‘g’ and a pair of scissors for ‘X’.

Extract from ‘The Spanish and Visayan alphabets’ with Roman transliteration.

But what all this really puts me in mind of is the gloriously eccentric ilustrado Pedro Paterno, who reflected way back in 1887 that the baybayin symbols ᜊ and ᜎ as in ᜊᜑᜎ (<bat><ha><la>, ‘god’) were imitative of male and female sexual organs, and that ᜑ represented a kind of divine ray of light uniting the two. Comandante on the other hand, likened to ᜊ a clam shell (see below). What is it about that syllable?

Four things you may not know about our Baybayin

By IME MORALES
August 23, 2013 11:40am
343  12  4  610
He showed two pictures of plants of the same kind, one grew way taller and healthier than the other. This one has been growing in water “powered” with a symbol from Baybayin, while the smaller plant was submerged in plain water.
In a lecture organized by Conscious Heart Creations at the UP TechnoHub last July, Bonifacio Comandante, Jr., Ph.D., —anthropologist, professor and multi-awarded engineer, scientist and inventor—revealed there is more to Baybayin, our precolonial writing system, than meets the eye.
Among other things, there is such a thing as a Baybayin Dance. Also, there are “subtle energies”—as evidenced by the plants—found in all of the 17 symbols of this ancient syllabary.

Our ancient Baybayin is said to have been based on the giant clam Taklobo. Photo courtesy of Bonifacio Comandante Jr
As our forefathers’ age-old system of writing, Baybayin is believed to have existed in our archipelago even before the first Spanish colonizers sailed toward our shores. Our ancestors used it to pen songs, prayers, verses and messages or letters on such materials as tree barks, bamboos, leaves, rock faces, and metals.
Comandante, the scientist who invented the “sleeping fish” technology (a discovery that earned him numerous awards from all over the world), revealed the following results of his research on this ancient form of writing.
1. Baybayin scripts predate the birth of Christ.
According to Comandante, the Manunggul Jar (Palawan) that was carbon-dated to 890-710 BC bears very old Baybayin scripts, contrary to findings that the markings are just designs.
If this is true, it debunks historical assumptions that place the creation of this system of writing at around a hundred years before the Spanish colonizers came in 1521.
2. Baybayin has been the inspiration for a dance, called Sayaw Baybayin (Sabai) or Baybayin Dance, and a form of local martial art, Baybayin ng Silangan (Bangsi).

The Baybayin Dance. Movement is based on the 17 characters of our syllabary. Photo courtesy of Bonifacio Comandante Jr
The movements are copied from the forms of the written symbols.
In his paper titled “Baybayin Dance: Script Forms Through Time,” Comandante argued that the adaptation of the script forms into movement has provided an easy way to learn how to write and read Baybayin, primarily because of “muscle memory.”
“You can use the Baybayin Dance to heal yourself and to pray—prayer through dance is the ultimate therapy,” he said.
The dance itself does not have specific or prescribed movements. The dancer is free to create her own expressions of the 17 symbols found in this ancient writing system.
3. The Baybayin script originated from the taklobo or giant clam.
Comandante made this discovery after spending some time with a Tagbanua native from Palawan.
The giant clam, said Comandante, was used by our ancestors as food, tool, container, utensil, source of lime for their betel chew, body ornament, or as a burial implement.
In his paper, which he first presented at a conference in 2011, Comandante suggested that each Baybayin syllabary is a word in itself and may have evolved from our ancestors’ ritual or practice related to the giant clams. The symbols themselves may have been inspired by the physical shapes and forms of and on the clam itself.
This theory presents an important and interesting development in the historical study of Baybayin, which could disprove previous assumptions on the origins of the syllabary.
4. The Baybayin script has inherent subtle energies.
Comandante experimented on plants and discovered that each Baybayin syllabary carries specific powers that are related to its very nature.

Dr. Bonifacio Comandante is at the forefront of the study of the Baybayin, the Philippines’ ancient syllabary. Ime Morales
He is able to harness these energies for use in growing plants and healing oneself and others.
The process involves writing down the appropriate Baybayin symbol and attaching the paper onto the subject, much like how albularyos write down their oracion and stick the piece of paper (tapal) onto the person’s body.
“Do not forget that this is your prayer. Be specific, sincere and concise about your request and include the phrase ‘My Prayer,’” Comandante revealed. Messages or prayers that are uttered are more effective, he said.
Baybayin now set aside
Comandante lamented that Baybayin has been set aside after the Spaniards came to the Philippines. Before this happened, the Filipino people were united through Baybayin.
“Now, we cannot understand each other because we are so different,” Comandante said. —KG, GMA NewsThose wishing to learn more about our indigenous syllabary can visit Dr. Comandante’s website at www.baybayin360.org.
Standard
Did you read it? Did you read it?
.
Since my daughter was born I have spent countless hours in a dark room trying to get her to sleep with one hand, while reading things on my phone with the other. I’ve trawled the wastelands of the web, clicked on unprepossesing links, read the articles and sifted out the best. There’s everything from the Daily Mail-esque A 17-Year Old Russian Powerlifter With a Doll-like Face to the dizzlingly high-brow Further Materials Toward a Theory of the Man-Child.
Read it through from January to December (in progress) and you’ll be as up to date as the white people in Portlandia. I recommend using Instapaper to save the things you want to read later.
Enjoy!
.

And for the record, here are my favourites from 2012 and earlier, in no particular order:

This cartoon is fun, from Itchy Feet: a travel and language comic from Malachi Rempen: 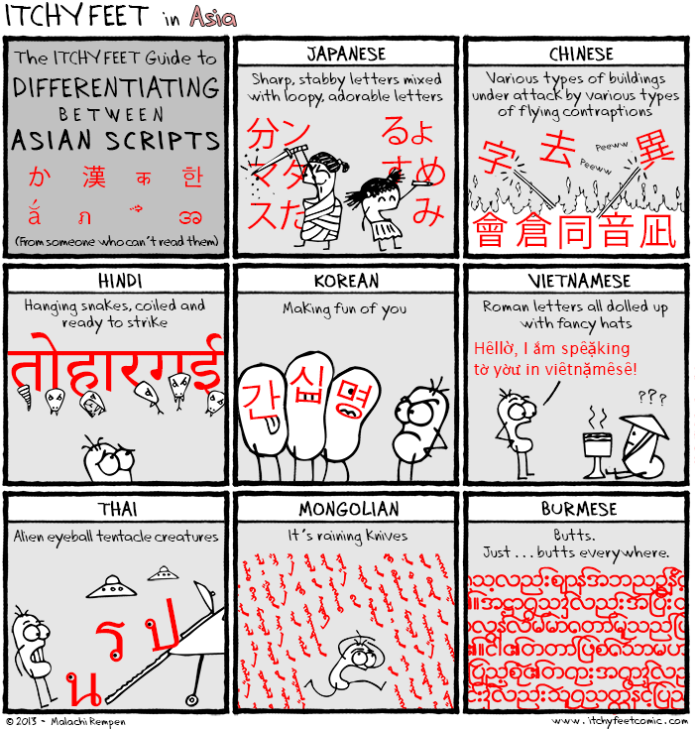