In this post I wanted to reflect on a couple of my recent experiences of being led down the garden path by later additions or interventions into archival metadata. I don’t want to give the impression that I think curators and archivists are hopelessly ignorant and misguided. On the contrary, these examples illustrate the kinds of things that can go wrong when everyone is ostensibly doing the right thing. So I’m not sure if there will be any clear lessons except to emphasise the truism that interpretation is an ongoing, open-ended process fraught with danger as well as discovery.

To start with, both of these cases were affected by the fact that many collecting institutions make only a very thin layer of information available online for the public. There is no conspiracy here. The sheer person-power involved in digitising catalogues and card files is no doubt well outside of the budget range of most small- or middle-sized institutions. Even those larger museums that have managed to transfer all the hardcopy information onto spreadsheets may not have not taken the next step of turning those spreadsheets into searchable online databases.

This is why, wherever possible, it makes sense to visit museums in-person (global health crises permitting). Quite apart from being able to examine the objects themselves, it allows the researcher to compare the online information with the in-house spreadsheet, the paper card files and the catalogue volumes. Very often information is lost when it is transferred onto a spreadsheet, for example, we lose the hand-drawn diagrams, the queries in the margins and even the different handwriting styles that can tell you if more than one person added to the description.

Objects in collections have no intrinsic value. All their significance lies in their circumstances of use and production, the knowledge that attaches to them, and the stories and experiences that they are part of. This means that if an object cannot be associated with a context, however minimal, then it’s basically just a piece of curious bric-a-brac. Metadata is what gives an artefact its value and, if we’re really lucky, helps to identify its traditional owners.

On the other hand, an object cannot be reduced to its metadata.  For one thing, ideas about what constitutes meaningful metadata have varied from age to age. During the period when the Indigenous materials in Australian museums were collected en masse, collectors considered only a very narrow range of contextual information to be valuable. We learn, for example, of the type and purported function of the object, the name of the collector, the year it was collected, and a site of origin that is often very vague (eg, ‘Western Australia’). We are typically also treated to a painstaking yet entirely redundant description of its physical properties in standardised scientific terms including measurements of its dimensions. Glaringly absent is the identity of the maker or owner of the object, details about its life history, and how it may have been used or valued beyond its immediate function. (Was this eel spear also used in eel dances? What items were actually carried in the dilly bag?)Also important, but missing, are the terms of its relinquishment to the collector. (Was it manufactured for the purpose of sale? Was it too old or broken? Was it traded fairly or given up under duress?)

Accurate provenance and ownership information is, of course, the highest prize. If it’s possible to establish precisely where an item is from we have an immediate contextual frame to work with and to begin re-associating the object with its traditional owners. Otherwise archival researchers have to work very hard to squeeze insight out of the scrappy metadata that’s available. For example, if an item is recorded as being from a particular river that doesn’t really narrow the field, but if an Indigenous word is included with it, we might have some luck by searching through Indigenous lexicons in likely-looking languages along that river. Other clues, of course, include stylistic features or the identification of the material resources that the artefact is made from.

Unfortunately in these times of pestilence, archival researchers have to be content with the the thin surface layer offered by online catalogues, and so there is much less information at our disposal from which to draw inferences.

Here then are my two cautionary tales about making inferences from limited metadata.

An accidentally sacred photograph from nowhere

Last year I began recording oral histories of message sticks in a few sites in the Top End, and I’m in the process of contextualising these histories against the material record. Recently, I came across the record for an image in an online library catalogue. Based on its caption I thought that it was relevant to a set of stories I had recorded. When I tried to access the image I was blocked with a notice informing me that it was Secret/Sacred/Restricted. Even the metadata itself was suppressed. This struck me as immediately curious since I had been collaborating with the very people who ought to have had the authority to make this judgment. I contacted the relevant cultural organisation I was working through in the Top End and they encouraged me to follow it up. With a bit of ninjitsu I managed to access the metadata and noticed that it included the term “initiation ceremony”, but this was in the context of a description that made it clear that the suppressed photo was NOT of an initiation ceremony but of a public interaction that occurred some time prior to one taking place. I wrote to the library politely asking for their record of Indigenous consultation for this object and to give an account of why it had been suppressed. They admitted that there was no consultation and agreed to release the image, which they did promptly.

No harm done, but it caused me to reflect on why this innocuous decision was made and the long-term consequences it might have had. I imagine that thoughtful curators wanting to do the right thing may be tempted to put a Secret/Sacred sticker on an ambiguous object or photography just to be on the safe side and avoid inadvertently provoking offence or distress. But if it takes insider cultural knowledge to decide whether something is allowed to be released to the public, it takes the same degree of knowledge to judge whether the item should be restricted.

Once a Secret/Sacred label is affixed it tends to be very sticky and there may be little motivation to investigate it. Even those with the relevant cultural authority might be cagey about interacting with it since there will always be somebody with more authority than them. For better or worse, the item is likely to disappear into oblivion. This is why placing Secret/Sacred labels on records can literally damage an archive if not done in a consultative way. I have Indigenous colleagues who spend a lot of time in archives looking for images of their forebears, and discovering a familiar face in a photo is a rare cause for celebration. It makes me wonder: are there images and objects of deep personal significance that have been mistakenly consigned to the void by somebody without the authority to make that decision?

As it happens there were no negative consequences in this instance, and it transpired that even if the image in question had remained restricted it wouldn’t have been a disaster. When the institution released the photograph I was able to establish more information about it that contradicted the original metadata. The library had misidentified the site by a huge margin (the fault lay in the original handwritten caption), and thus the people who were said to be featured in the photograph were not who they were purported to be. And not only was the event a secular one, but the image itself had been republished in a 2008 volume with the participation of descendants of those depicted. Again, no harm done. Archives are chock full of such mistakes and it’s always satisfying when you can do a bit of detective work and get the information updated. But the bigger point is that information on why an item is restricted, and on whose authority, must be public. This information is not itself a secret. It would be sufficient to include a notice to the effect of: “This item refers to a restricted event/object/individual. It was removed from public access in 2008 on the basis of advice received from the following cultural authorities …”. Such a notice would give researchers the confidence that the decision was not made on the basis of a naive keyword search. It would give Indigenous applicants confidence that their cultural safety was taken seriously and that they had an avenue to contest or renegotiate the status of the item in the future.

The second cautionary tale involves a case where two objects were represented in the catalogue in a way that was misleading as to circumstances of their collection.

What inferences might you draw from the information circled in this record? 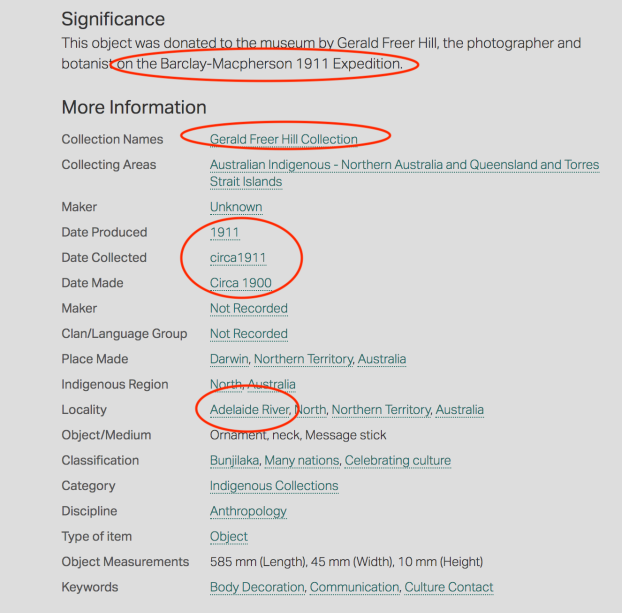 I would infer that the object was made in about 1900 and later collected by Gerald Freer Hill on the Adelaide River during the Barclay-Macpherson expedition of 1911. If this is true it means that the traditional owners could likely be identified as people whose country lies on the Adelaide River and who were occupying the section of it that was intersected by the expedition.

Sadly this is very unlikely. A bit of background research (thanks Bruce Strong and David Nash) indicates that this expedition did not get as far north as the Adelaide River. Nor do the relevant expedition diaries make mention of any interactions with Aboriginal people that are in any way likely to have resulted in objects such as these being collected on that journey. It is more probable that Hill collected the artefacts in Darwin at a later date when he was employed as a government entomologist. As it happens, the record does clearly show that the item was collected in Darwin which makes matters even more confusing.

Two ‘good’ decisions contributed to the distortion: 1. The decision to insert the largely irrelevant information about Hill’s participation in the 1911 expedition. 2. The policy of indicating the relevant river or drainage system as part of the provenance information.

All things considered I have to admit that the museum has done a reasonably fine job here: the record includes a short preamble that draws attention to stylistic features that would notionally place the objects in the Arnhem region to the east of Darwin. Even so, I would expect that the details about the river and the expedition was not included in the hardcopy record but were interventions made later, in an effort to better contextualise the record. It makes me wonder about the integrity of other pieces of metadata. On what basis, for example, was the object judged to have been created in ca. 1900?

My intention is not to be pedantic or critical. I’m very aware that there is no such thing as pure unadulterated data untouched by the partialities of those recording it, and that separating description from analysis is much easier said than done. Nevertheless, I’m also conscious that ‘tricks of the light’ in archival records can generate illusions that lead us astray, and take us further from identifying the traditional owners of the objects.