I have a new article “The origins of invented vocabulary in a utopian Philippine language”, out in William Labov’s new journal, Asia-Pacific Language Variation. This is the last time I’m going write about the Eskayan language until my book is eventually complete. 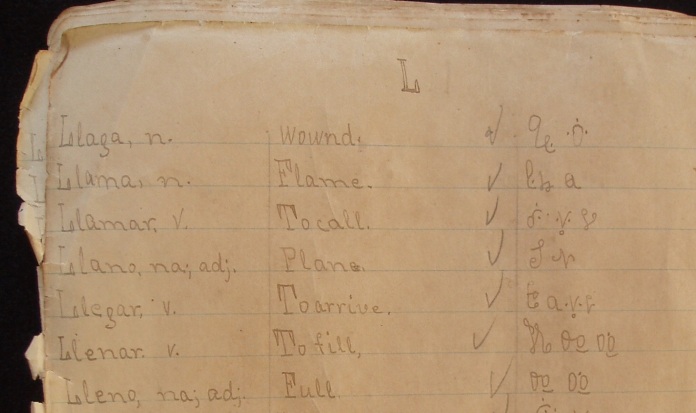 Spanish-English-Eskayan wordlist. An explanation of the script in column three is here.

And if you don’t want to read it, here are a few representative quotations:

The possibility is also left open that, contrary to the traditional account and the strong impression of relexification from Cebuano, Eskayan is indeed a natural language. In this instance, Pinay would be comparable to other legendary human creators of natural languages such as Adam in the Semitic tradition, or the sage Agastya who was said to have been inspired by Shiva to create the Tamil language and script (Shulman, 1980).

The data are too minimal to make any kind of confident generalising claim but of interest here are the apparent cognates of six Austronesian number terms (‘four’, ‘six’, ‘seven’, ‘eight’, ‘nine’, ‘ten’), two body part terms (‘arms, pubic hair’) and one term apparently sourced from regional lexicons (‘morning’). In a relexification scenario Pinay may have been sufficiently familiar with regional languages or dialect diferences to appreciate the relative stability of these kinds of core terms across Philippine languages and be inspired to innovate a cognate-like lexeme

Viewed in isolation, the existence of Spanish-like cognate terms for post-contact ideas and products might lend the impression that Eskayan was a natural language, or that it had acquired foreign-inspired vocabulary since its creation, or at the least that Pinay deliberately reproduced similar patterns of colonial lexification found in other Philippine languages. However, these words are by no means representative of post-contact terminology in the Eskayan lexicon as a whole. In fact, contrary to expectations Pinay’s lexicon includes many more post-contact related terms (73 in total) that are quite clearly not inspired by colonial vocabularies.

Informants in Cadapdapan maintained that Pinay was able to prophesy new technology before it had been created and this was tendered as an explanation for words such as kanis ‘aeroplane’.

The Eskayan case appears to demonstrate that even the most radical linguistic utopians cannot easily escape their own skins, relying for their constructive project on raw materials that are easiest to grasp and closest to hand.

Indeed, Thomason later foregrounded sociohistorical factors — such as a desire for prestige, the promotion of distinct political identities, the need to keep outsiders at a distance or expressing play and creativity — in her theoretical account of deliberate language change (2007). In short, without a firm understanding of speakers’ motivations and their particular historical circumstances, efforts to capture typologies of languages like Eskayan will continue to prove elusive.